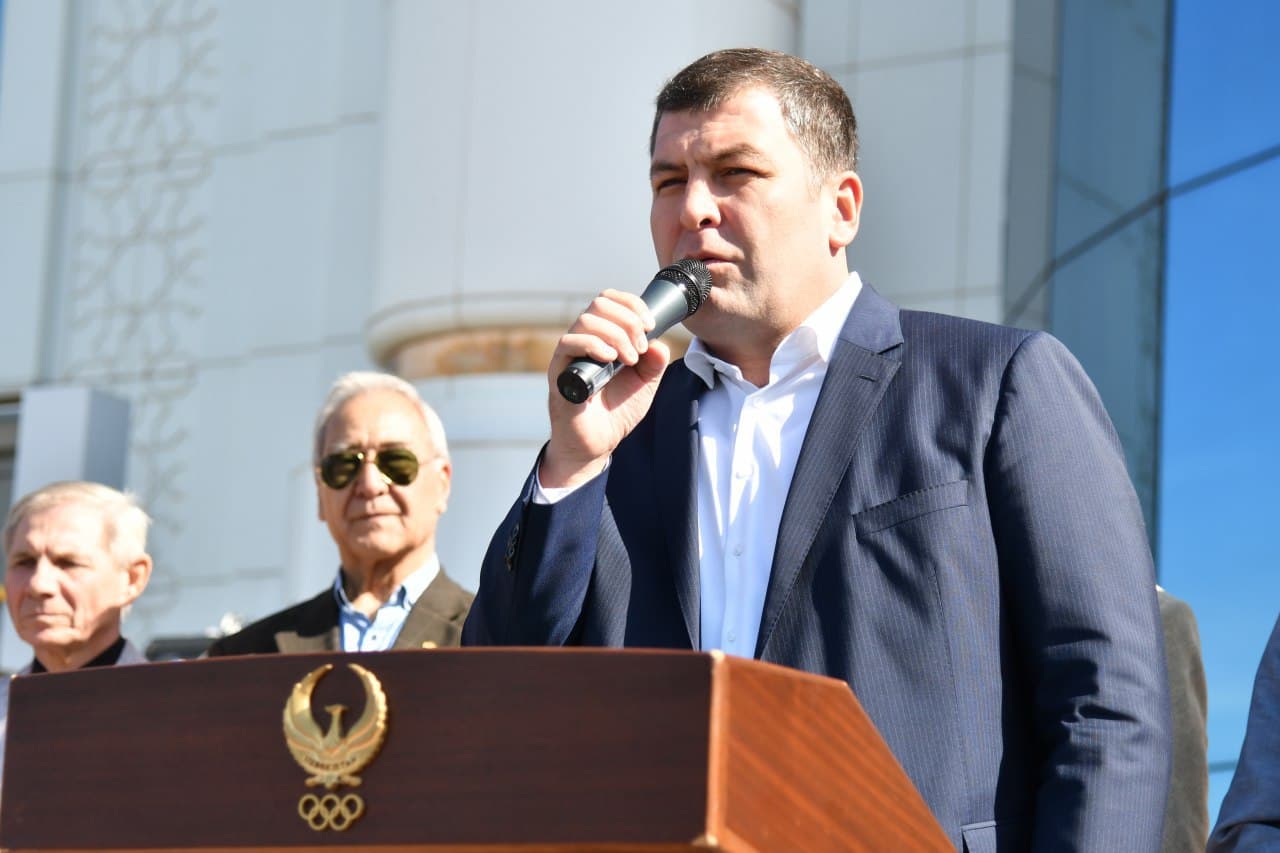 Alisher Alimov: "It is very important for athletes to feel the support of the head of the country”

As you know, the World Sambo Championship was recently held in Moscow, the capital of the Russian Federation. SAMBO athletes of our country also successfully participated in it.

During the competition, the chairman of the Sambo Association of Uzbekistan Alisher Alimov gave a big interview to the press service of the International Sambo Federation. In this conversation, published on the official website of FIAS, Alisher Alimov spoke about the success of Uzbek athletes in the international arena, the impact of changes in weight categories on the results, as well as the upcoming World Sambo Championship in Tashkent. Below we bring this interview to your attention.

– How do you assess the participation of Uzbek athletes in the World Cup?
– First of all, I would like to thank the International Sambo Federation, as well as the Russian Sambo Federation, for organizing such a sports festival. You are well aware that because of the pandemic, such competitions are poorly organized all over the world, and we understand the work behind this. If we talk about the participation of Uzbek athletes, then we came to this World Cup in an updated composition - with boys and girls who became champions of Uzbekistan. We allowed them to prove themselves and gain experience by performing on the international stage. It is no secret that every athlete feels differently at competitions at home and on the international stage.

– How lucky do you think the Uzbek SAMBO athletes were on the first day of the competition?
– Of course, we expected an even better result from the first day of the competition. But this is a sport in which it is impossible to predict the results. I must say that our athletes were seriously preparing for the competition. Before each international start, we seriously prepare athletes. This time we decided to keep our prize-winners, world champions for the Asian Championship, which will be held on June 4-6 in Tashkent. In addition, the capital of Uzbekistan will host the World Sambo Championship from November 12 to 14. Our athletes have the opportunity to prove themselves in all possible ways.

– In recent years, the national team of Uzbekistan has shown high results in international competitions. What do you think is the reason for this?
- You know that since the beginning of 2019, the team of the Sambo Association of Uzbekistan has changed: the general director, senior coaches, women's coaches, as well as young people. There was also a change in the leadership of the Sambo Association. The vice-chairmen and the administrative staff were replaced. Together with our colleagues, we are working on the development of sambo in Uzbekistan. However, it should be particularly noted that without the current attention of the President of the Republic of Uzbekistan to sports, in particular to SAMBO, we would not have been able to achieve such results. It is very important for the leadership of the association and athletes to feel the support of the leader of the country.

As for the results, the national team of Uzbekistan took 12th place at the 2018 World Cup. And in 2019, we became the fifth. In 2020, at the world Championship in Serbia, we took 3rd place. This is a serious result for us, a big step forward. I am proud of our athletes and team.

– What is the secret of your success?
– The attention of the country's leadership to SAMBO and the sincere work of our team. We do our best to provide athletes with the best conditions. And they, in turn, show all this on the carpet. Of course, we are not going to stop there and move forward. I think we will still please SAMBO fans.

– You spoke about the support of the President of the Republic. How is this reflected?
– It is no secret that in sports there are such concepts as Olympic and non-Olympic sports. In Russia, SAMBO is equated with the Olympic sport, but not in all countries. In our republic, for example, SAMBO was partially funded by the state until 2019. From 2019 until today, thank God, our association for all international competitions-from the World Cup to the World Cup-is one hundred percent funded by the state. The Ministry of Physical Culture and Sports of the Republic of Uzbekistan, as well as the National Olympic Committee, support our athletes.

– As far as I understand, the support is not only one-sided. I know that the attention to this sport has also increased from the media. Sambo athletes of Uzbekistan-stars…
- I agree with your opinion. Without active work with the media, we would not have been able to achieve this effect. We understand that the media is the main weapon in the popularization of SAMBO. That's why we cooperate with journalists. Over the past two years, the media, the Internet and social networks have increased the amount of information about SAMBO. Facebook Instagram, Telegram, and Instagram pages also show this. Our website contains information about our address, email address, and phone numbers. There will be a lot of requests and comments through them. We tell them about the prospects of SAMBO, about the plans.

– Let's go back to the tournament that is currently taking place in Luzhniki(the conversation took place during the World Cup in March). The World Cup is held for the first time in new weight categories. To what extent did this affect the training of your athletes and the result? Are you ready for this?
– We were ready. Every year in February, we hold the Sambo Championship of the Republic. This year, we also organized a tournament in a new weight category for the first time. Of course, at first it seemed like melting to athletes and coaches. But before the championship, we organized a seminar for the coach and the judges, where everything was explained. Everything changes over time, people quickly learn and get used to it. As a supplement, I can say that most of our athletes are delighted with these changes. Because the issues related to weight loss have become easier for them.

– Namely, the preparatory process and the results of the national team of Uzbekistan at the competition did not come as a surprise to you. There were no sensations associated with weight changes?
- The ball is straight. As I said, we expected more. But I'm still happy with the results. During the first day, four of our athletes reached the final. We also have the finalists of the second day. We hope that all of them will win.

- Since January 1, the international rules for sorting have come into force. Do you think that the introduction of the belt system can contribute to the development of SAMBO in Uzbekistan and around the world?
"Absolutely! The rating should be in every sport. Sambo athletes, as well as children, still went with the medals won at city, regional and other competitions. The appearance of belts motivates both children engaged in sambo, and adults in their place.

– At the beginning of our conversation, you mentioned the holding of the Asian Championship and the World Sambo Championship in Uzbekistan. What is the reason for this decision?
- In 2025, Tashkent will host the Asian Youth Games. The decision was made, and Tashkent, as the host country, began to prepare for this competition. You know that the host state chooses the sports in the program of the Games itself. We held talks with the Ministry of Physical Culture and Sports and the National Olympic Committee on this issue and asked the organizers to include SAMBO in the program of the Games. Given the development of sambo in Uzbekistan, this idea was supported.

Before these games, Tashkent should also hold major sports competitions. The Asian and World Sambo Championships are a good chance to gain experience and prove yourself. But the main thing is to popularize this sport in the country and around the world.

– Two major competitions a year will not be a problem for your country?
– We were very happy when the executive Committee of the International Sambo Federation supported our candidacy: it is a great honor for us and we will hold the main tournament of the year according to the FIAS calendar. We justify the expressed self-confidence. We will do everything possible to ensure that the participants of the competition and the fans get a real pleasure from this sports holiday.