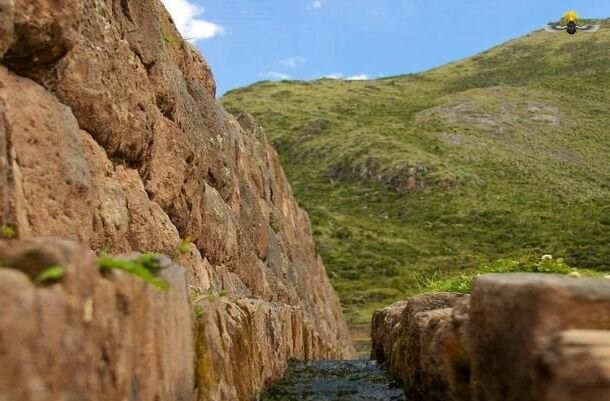 What things in ancient times did better than us?

Who would have thought that a government in the twenty-first century would turn to 1,500 years of technology to solve the problem of access to water? But this is exactly what is happening in Lima, the capital of the Republic of Peru.

Peru is facing a serious water crisis, as water pollution and environmental changes combine to undermine the water security of the entire country. The country's water utility company Sedapal has put forward a new plan to revive an ancient network of stone canals built back in 500 AD to provide clean water to the population.

Steel
The Syrian city of Damascus was already a major metalworking center in ancient times. Damascus steel was made from raw materials imported from Asia, known as Wootz steel. Other components were added during the steel production process to create chemical reactions at the quantum level. It was first used around 300 BC, but was mass-produced in the Middle East between 1100 and 1700.

Concrete
The Romans made concrete by mixing lime, volcanic rock, and seawater. The combination of these three components contributed to the immediate triggering of a chemical reaction in which lime reacted with ash to become cement. Ancient concrete with the addition of seawater contained a perfect crystal structure of tobermorite, which has greater strength and durability than its modern counterpart.

Road construction
These days, a decent highway can be built in a year at best. But this was not always the case. The ancient people were well aware of the importance of roads and networks connecting cities and settlements in different regions and countries ... and they built them quickly!

Qhapaq Nan, or the Main Road of the Andes, is a huge network of roads, used in ancient times by the powerful Inca Empire, stretching more than 30,000 kilometers. It was the basis of the political and economic power of the Inca Empire and connected the industrial, administrative and ceremonial centers of the pre-Indian culture of the Andes.

Cutting stone
A striking example of ancient stone-cutting can be found in Puma Punku, an archaeological site in Bolivia that historians claim is 15,000 years old. It contains such incredible masonry that it gives the impression that the stones were carved with a diamond tool. Huge blocks weighing up to 800 tons are characterized by perfectly smooth edges. Attempts to reproduce the accuracy of masonry in our days have not been successful.

Agricultural industry
Human sacrifice is the first thing that usually comes to people's minds when they think of the Aztecs and other Mesoamerican cultures. However, these civilizations were also famous for their real achievements. One of them was the Chinampa agricultural system, the so-called "floating gardens" that can be seen in the shallow lake valleys in the valley of Mexico.

Walls
The Inca civilization is also known for its perfect stone work, many of which can still be seen today in Machu Picchu and Sacsayhuaman in Peru. The stone walls were made of huge blocks, neatly cut so that they fit snugly together without mortar and with unsurpassed precision.

Urban planning
When archaeologists discovered the 5,000-year-old Mohenjo Daro in Pakistan, they were struck by the fact that the city displayed an exceptional level of civic planning and amenities. The houses had brick bathrooms, and many even had toilets. Waste water from them flowed into brick sewers that ran through the center of the streets and were covered with bricks or stone slabs. The cisterns and wells, which were built of wedge-shaped bricks, contained the public supply of drinking water. During the city's heyday, it had about 40,000 inhabitants.

Weapon
The ancient Greek scientist and engineer Archimedes (287 — 212 BC) created the heat ray weapon (sometimes called the "death ray") to protect against the ships of Syracuse, a historic city in Sicily.

According to the 2nd-century AD author Lucian, the weapons were made of large reflectors (possibly of polished bronze or copper) that focused sunlight on approaching ships and caused them to catch fire.