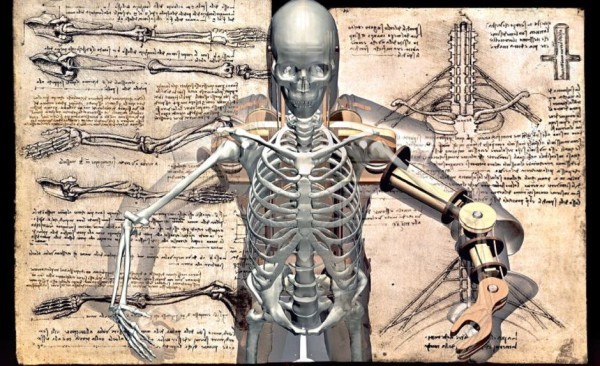 The Da Vinci code. Why did the great Leonardo make deliberate mistakes in his drawings?

Leonardo Da Vinci was the greatest creative genius of all time. His ideas, captured in old notebooks, have survived to this day. Most of the scientist's projects could not be implemented during his lifetime, because they were significantly ahead of the technical capabilities of the Middle Ages.

But today they are all quite feasible, moreover, it has been established that they really work. The only pity is that the scientist in his notes practically did not specify the details, so the engineers have to rack their heads trying to figure out what exactly he meant.

The inventor very painstakingly studied the anatomical structure of a person in order to understand exactly how the body functions. He was able to understand that it is the musculature that drives the skeleton and decided that a similar principle could form the basis of the device. Historians believe that this machine was indeed designed, but was used for entertainment.

The robot has not been preserved, so it is difficult to say what exactly it was like and capable of. Most likely, he could walk, sit, and even move his mouth. At the beginning of the century, the roboticist Mark Rosheim used Leonardo's notes in the development of search robots. These devices will be used by NASA in the study of distant planets.

In addition to the structure of the human body, Da Vinci was interested in the structure of the body of birds. Birds inspired him, he could watch them for hours, capture them on canvas. And, of course, I was thinking about creating flying vehicles. The result was an ornithopter. In theory, this device could lift people into the air as if it were a bird. The wings of the device had to move after pressing a special handle. The device shows how deeply Leonardo understood aerodynamics. Attempts to reproduce the device showed that it could actually function.

It seems that this device could become one of the outstanding creations of the master in the field of military equipment. It was a machine that looked like a huge turtle, with a diameter of three dozen guns sticking out. Wheels with large teeth created consistency, and the people inside were protected from outside influences by the strong walls of the machine. The powerful tank fired in all directions at 360 degrees. It could be truly deadly for the enemy's squad. His scheme in the notes of the inventor contains a curious defect — the wheels for moving forward turned in the other direction. A tank designed like this would not be able to move.

The inventor was too clever to make such a mistake. Obviously, the mistake was made deliberately. Maybe he didn't want the invention to be built. Or he didn't want his notes to fall into the hands of an evil person, so he deliberately made a mistake so that no one could use the development.