Oybek Kasimov: "The Regional Forum is a very useful platform for bringing sports management to a new level" 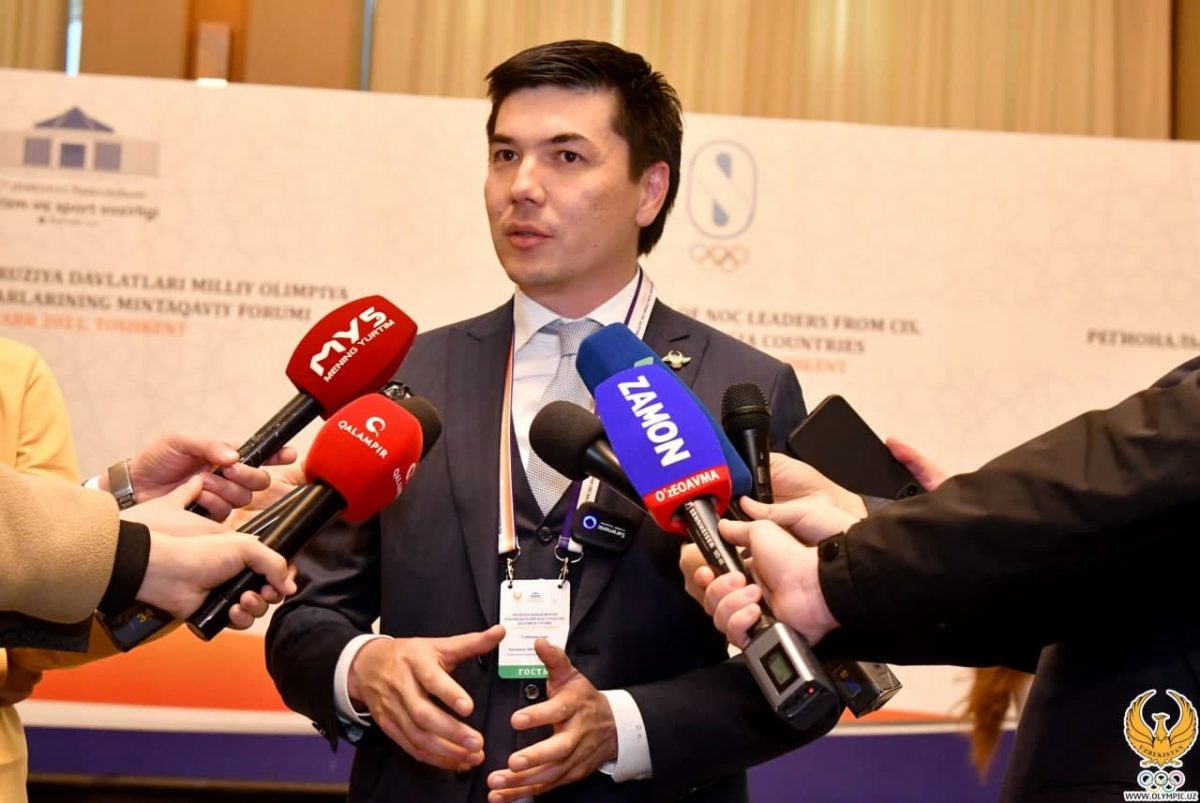 On November 1-4, Tashkent for the first time met participants and guests of the next regional Forum of heads of National Olympic Committees of the CIS, Baltic States and Georgia. At this event, organized at a high level, agreements were reached on such promising areas as bringing sports to a new level in the region, strengthening the promotion of a healthy lifestyle among the population. Within the framework of the event, plenary sessions of the forum were held, during which new strategic plans in this direction were built. We bring to your attention an interview with one of the main organizers of this forum, the Secretary General of the NOC of Uzbekistan Oybek Kasimov:

– What was the main essence of the forum and what does it give us?

– You know, the role of such forums in such areas as the development of cooperation, the development of new strategic plans is invaluable. At the event, each state delegation shared their experience of the work done over the past period (from forum to forum) on the development of sports in their country, the achieved indicators in the field of sports medicine, scientific and methodological direction and other areas. And therefore, naturally, each of the participants had something to learn and received what is necessary to raise sports to a new level in their country.

It also provides for the joint preparation of national teams for major competitions, the exchange of experience of coaches and other specialists, the training of qualified personnel (judges, analysts, sports doctors, psychologists) using modern methods, systems, as well as infrastructure using advanced technologies based on new trends. Of course, the regional forum is a very useful platform on the way to bringing sports management to a new level.

– In your opinion, did the Forum go the way the organizers intended?

- I can safely say that the Forum was even better than we planned. I myself have participated many times in similar events organized in other countries. It was held at a higher level than the previous ones. This is not only my opinion, but also the other delegates who participated in it. Representatives of Georgia, Lithuania and other NOCs, who have many years of experience in participating in such Forums, noted that there have never been such high-level events in their activities. They also noted that our country, having held this event at such a level, has set a high bar. And in order to maintain this level, the organizers of the next forum, the NOC of Azerbaijan, will also have to work hard, experts noted. First of all, we tried to pay special attention to the organizational aspects down to the smallest detail. From where the participants sit to every moment of the program, it has been designed as carefully as possible. The result was even better than we expected. I repeat, this is the opinion of all participants, not just ours. The coordinator of the event, Yuri Nikolaev, expressed his deep gratitude for the organization after the forum. The guests received full information about the development of sports in Uzbekistan and highly appreciated the level of preparation for the forum. According to the program, an excursion to the sights of the cities of Samarkand and Tashkent was organized. The special attention paid to each guest by the responsible persons was evaluated positively.

- During the forum, memorandums of cooperation were signed with NOCs of a number of countries. Can you tell us about the significance of these documents?

– Before that, we signed a memorandum with Russia, Ukraine, Turkmenistan. In addition, Belarus is also strong in a number of sports. They have aspects that we can apply to us. The European Games and the Islamic Solidarity Games were held in Azerbaijan. The sports infrastructure is at a very high level. They have a strong sports orientation, sports medicine is well established. There is much to learn from each other. In this regard, these memoranda will serve as an incentive to strengthen ties of cooperation between the countries, develop physical culture and sports, exchange experience and bring preparatory processes to a new level.

– As for Tatarstan, the first games of the CIS countries were held there. As part of this comprehensive event, Deputy Prime Minister of the Republic of Uzbekistan, Minister of Tourism and Sports Aziz Abdukhakimov met with the President of Tatarstan in Kazan, during which issues of bringing relations between the two countries to a new level were discussed. We know that Tatarstan is the capital of Russia in the field of sports. There are many excellent sports facilities. Uzbek athletes hold many foreign training camps in Kazan. In accordance with the terms of the memorandum, joint work in this direction and further strengthening of partnership relations are envisaged.

As you know, we also have cooperation with the Russian Olympic Committee. Within the framework of this cooperation, we will also strengthen ties with Tatarstan. Taking this into account, an agreement was reached with their Olympic Council on the use of sports infrastructure and the establishment of an exchange of experience.

– What will be the significance of such forums in preparation for the Asian Youth Games "Tashkent-2025"?

- Within the framework of the forum, interest in the Asian Youth Games "Tashkent-2025" was also expressed. Baku and Kazan have experience in hosting tournaments of this level. Similar prestigious competitions were held in many countries that took part in the forum. Within the framework of such forums, further cooperation and exchange of experience are being strengthened. Therefore, such events are a good platform for the implementation of such plans. First of all, each participant exchanges experience about what new innovations, new approaches, new relations in the field of sports have been established in their country.

Several professors also attended the forum. Each state has promoted its own initiative, the innovations they have achieved in this area. This is a very good tradition. I think we've got what we need.

The Forum is a great platform for the exchange of experience in the field of pharmacology, preparation for major competitions, sports management, infrastructure, coaches and specialists. These forums are a platform that promotes the development of sports of the participating countries, improving the level of preparation for the Olympics.

In conclusion, I would like to say that our impressions, knowledge and skills gained at the forum will serve the further development of Uzbek sports in the future. Taking this opportunity, on behalf of the National Olympic Committee of Uzbekistan and on my own behalf, I express my gratitude to our Government, relevant ministries and other departments, colleagues for their help in organizing the event at a high level.