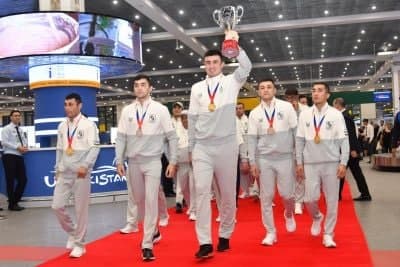 For several years now, Uzbek boxing has been leading the world, and Uzbek boxers have repeatedly proved their superiority and won many victories. In order to further develop and improve the world-famous "Uzbek model" of boxing and strengthen the popularization of this sport among our youth, a decree of the President of the Republic of Uzbekistan was published. The Resolution sets out in detail the concept of boxing development until 2025, the development of a "road map" for the implementation of the concept for 2021-2022, as well as the instruction to increase the number of students engaged in boxing in educational institutions to 27 thousand.

Taking into account the mass interest of young people in boxing and in order to further improve the system of identification, selection and selection (selection) of talented athletes in the country, improve the training and financial incentives of specialists in the field, as well as maintain and continue to occupy the leading positions of Uzbek boxing in the world:

the transformation of boxing into one of the most popular sports among the population, the establishment of a new system of identification, selection and selection( selection), as well as the training of talented athletes as professional boxers;

further development of the boxing infrastructure and bringing it in line with international requirements, increasing the number of boxing schools, including on the terms of public-private partnership;

development of the training system for professional coaches and judges, development of training manuals, further strengthening of the scientific and methodological base for boxing;

phased inclusion of boxing in the program of physical training in the Armed Forces and law enforcement agencies;

taking the necessary measures to preserve and continue to occupy the leading positions of Uzbek boxing in the world;

increasing the parameters of the state order for boxing in sports educational institutions.

3. Establish that in boxing schools:

the activity is aimed at selecting and mainly training talented young athletes for national teams;

training is organized from the 7th grade, a 5-year training period is established;

students are entitled to free tuition, meals provided in accordance with the nutrition standards provided for students of Olympic reserve colleges, and free accommodation in the places of residence of students of these colleges;

managers, coaches, athletes and other employees are subject to the conditions of remuneration and material incentives established for specialized boarding schools of the Olympic reserve.

4. Determine the sources of funding for the activities of boxing schools:

funds of the budget of the Republic of Karakalpakstan, local budgets of regions and the city of Tashkent;

grants from international and foreign organizations;

other sources that are not prohibited by legal acts.

5. To determine the construction and equipment of boxing schools:

the customer is the state unitary enterprise "Engineering Company for the Development of Sports Facilities Infrastructure" under the Ministry of Tourism and Sports;

The concept of boxing development until 2025 (hereinafter referred to as the Concept) according to Appendix No. 1;

The roadmap for implementation in 2021-2022 Concepts for the development of boxing until 2025 (hereinafter referred to as the "Road Map") according to Appendix No. 2;

Target indicators of the Boxing Development Concept until 2025 according to Appendix No. 3.

a) The concept is implemented in stages on the basis of a separate "road map" approved annually by the Cabinet of Ministers based on the results achieved, targets and main directions of boxing development for the corresponding period;

b) The Road Map covers the following measures, which are scheduled for implementation in 2021:

increasing the parameters of the state order for boxing in the Uzbek State University of Physical Culture and Sports and its branches;

organization of computer-based classes that allow the introduction of information and communication technologies in the educational and training process, including combat with a virtual enemy;

creation of an electronic database that provides the ability to quickly obtain data about boxers;

c) The targets of the Boxing Development Concept until 2025 include::

bringing the number of constantly engaged in boxing students of sports educational institutions to 27 thousand by 2025;

opening of 7 boxing halls in the next 5 years on the terms of public-private partnership;

ensuring the participation of national boxing teams in about 46 international sports competitions.

The Council of Ministers of the Republic of Karakalpakstan, the khokimiyats of the regions and the city of Tashkent should take measures to allocate land for the construction of boxing halls on the basis of requests from the relevant territorial departments of the Ministry of Tourism and Sports.

8. Implement, starting from May 1, 2021, a three-stage system for identifying, selecting and selecting talented youth in boxing
in the regions, which provides for the implementation of:

at the second stage – regional competitions among athletes selected from sports schools, educational institutions and sports clubs specializing in boxing;

at the third stage – republican competitions among winners and prize-winners of inter-club and regional training camps (for example, World Series Boxing).

At the same time, the Ministry of Tourism and Sports, the National Olympic Committee of Uzbekistan and the Boxing Federation of Uzbekistan jointly staff boxing schools with talented athletes based on the results of competitions.

9. Accept the proposal of the Ministry of Tourism and Sports, the Ministry of Higher and Secondary Special Education to double the current parameters of the state order for admission to study in the direction of "boxing" starting from the 2021/2022 academic year» to the Uzbek State University of Physical Culture and Sports, specialized boarding schools of the Olympic reserve, specialized children's and youth sports schools and children's and youth sports schools.

10. The Boxing Federation of Uzbekistan in order to continuously improve the professional skills of highly qualified coaches, breeders, functional training coaches, judges, and other specialists with the use of modern scientific achievements and innovative technologies, to provide seminars, trainings, master classes and training sessions in boxing schools with the participation of domestic and foreign specialists.

11. In order to create a training base for national boxing teams, approve the proposal The Ministry of Tourism and Sports and the Khokimiyat of the Tashkent region on the transfer of the former stadium, swimming pool and dining hall, with an area of 1.5 hectares, located on the territory of the Yangiabad mound in the city of Angren, Tashkent region, on the basis of the right of gratuitous use, to the Boxing Federation of Uzbekistan until December 31, 2029. At the same time, ensure that at least 1 hectare of vacant land is allocated near the specified territory for the construction of a sports hall, a hostel, a canteen and other service and household buildings and structures.

12. To agree to the offer on acquisition by the Boxing Federation of Uzbekistan on the terms of the investment obligation of the building, sports facility and the nearby sports ground of the former Industrial and Economic Professional College located at the address: Tashkent region, Chirchik city, Zakovat Street, 2.

13.The Ministry of Economic Development and Poverty Reduction, together with the Ministry of Tourism and Sports, when forming investment programs for 2022-2023, should ensure the allocation of centralized capital investment limits for the construction, reconstruction and overhaul of the training base of national boxing teams and boxing schools on the basis of the developed design and estimate documentation.

14. The Council of Ministers of the Republic of Karakalpakstan, the khokimiyats of the regions and the city of Tashkent, until January 1, 2025, at the expense of local budgets, take measures to provide housing for coaches and other specialists involved in children's and youth sports schools and boxing schools located in remote areas.

15. The Ministry of Tourism and Sports and the Boxing Federation of Uzbekistan should ensure that the World Boxing Championship in Tashkent, scheduled for 2023, is held at a high level and develop a road map related to its holding.

during the World Cup, the costs associated with membership fees and bonuses are reimbursed within the funds provided for in the parameters of the state budget for 2022 and 2023 in stages over 18 months, but no later than May 1, 2023;

16. Exempt special sports equipment and accessories, training equipment, computer equipment, software products, inventory, construction materials and material and technical resources imported from abroad for the purpose of construction, reconstruction, major repairs, equipping and ensuring the activities of the training base of national national boxing teams and boxing schools according to the lists of the following items from customs payments (with the exception of value added tax and customs duties) until March 1, 2023, formed in accordance with the established procedure.

17. The Ministry of Finance should provide the necessary funds for the implementation of the tasks for the current and subsequent years in accordance with this resolution within the state budget funds for 2021 allocated to the Ministry of Tourism and Sports, and starting from 2022-annually provide the necessary funds in the parameters of the state budget.

18. Introduce the following procedure for the execution of this resolution:

to the Deputy Prime Minister-the Minister of Tourism and Sports Abdukhakimov A. A. – to ensure high-quality, full-fledged and timely execution of this resolution, to effectively organize and coordinate the activities of ministries, departments and organizations responsible for the implementation of the established measures, to hear monthly reports of the relevant managers on the work done, to promptly eliminate the identified shortcomings;

to the Deputy Minister of Tourism and Sports Karimov A. K.-to ensure that all necessary measures are taken to achieve the target indicators Concepts, implementations To provide methodological and practical assistance to organizations responsible for the timely and high-quality implementation of the established tasks, to submit monthly information to the Cabinet of Ministers on the implementation of this resolution.;

heads of responsible ministries, departments and organizations should take all necessary measures to ensure timely, high – quality and full implementation of the measures provided for in the Concept and the "Road Map".»;

to the General Director of the National Information Agency of Uzbekistan Kuchimov A. K. and the chairman of the National Television and Radio Company of Uzbekistan Khadzhayev A. D.-to organize the publication of articles, holding briefings, showing thematic TV programs on the coverage of the essence and content, as well as the practical significance of this resolution.

19. The Ministry of Tourism and Sports, together with the ministries and departments concerned, shall submit proposals to the Cabinet of Ministers within two months on amendments and additions to the legislation resulting from this resolution.